Non-Fungible Tokens (NFTs) have come a long way since their creation in 2014. They have evolved into many different forms such as meme NFTs, in-game NFTs, and even real world utility NFTs that give holders access to exclusive events. NFTs could also grant holders access to free airdrops, minting privileges, or whitelist for special collaborations.

Despite the current downtrend in the market, the hodling strength among NFT communities continues to stay strong. Some factors involved could be due to the bonds made within the community and the many benefits that some collections offer to their members.

While NFT collectors have long been concerned with the possibility of their project fading into valueless images as the floor price drop to zero, there has not been a way for holders to hedge the downside risks of the JPEGs that they own. After all, we know that NFTs are illiquid and when it comes to a bank run, most people are guaranteed to flee regardless of the loyalty mentioned.

Not forgetting the large percentage of NFT flippers that are in it for the gains or marketplaces like OpenSea charging exorbitant fees on every transaction. The idea of hedging and speculation has created a new untapped market in the NFT space.

With nftperp, NFT holders can now trade futures contracts on their favourite collection, benefiting from the upside while protecting themselves from the downside.

This first-of-a-kind NFT perpetual decentralized exchange will be rolling out on Arbitrum, which gives traders other benefits such as fast block time with instant finality. This will be a great way for anyone to create a delta-neutral position on their once illiquid and un-hedgeable assets.

Like all perpetual futures, the main purpose of nftperp allows anyone to buy or sell a contract on the NFT without ownership of the underlying asset. The platform will launch with a maximum of 5x leverage to ensure stability and growth instead of focusing on degen volume.

The Problem With Buying NFTs

NFT traders at present can only buy low in hopes to sell high someday. As mentioned above, hedging is also impossible which causes holders to be fearful during a bear market.

For the average retail buyer, owning a blue chip NFT like BAYC (77 ETH floor) is far out of their reach. This could turn a huge chunk of interested buyers away which is generally bad for the collection and community.

As such, the NFT market is missing out on a large amount of trading volume which has not been solved until now.

Created to facilitate directional bets on NFT projects, nftperp is an open-source decentralized exchange that allows anyone to either long or short collections such as Bored Ape Yacht Club, Moonbirds, etc, without using NFTs as collateral.

nftperp is built on top of a virtual automated market maker (vAMM) which was pioneered by Perpetual Protocol. The vAMM model removes the need for liquidity providers and order books, creating a player versus player (PvP) environment where traders profit from others losing.

Find out how the vAMM works in technicality here. Do note that the mechanism requires advanced knowledge of liquidity models.

Up to 5x leverage trading

Currently, nftperp takes a 0.3% fee for both long and short positions on their platform. The team has plans to launch their native token NFTP which can be used to pay for trading fees at a discounted rate.

The NFT perpetual futures exchange uses on-chain oracles to track the floor price of NFT collections in real time. Nftperp has partnered with the largest oracle in the space Chainlink, along with NFT-focused price oracle Upshot to ensure that prices are up to date and frontrunning bots are unable to attack the platform.

For instance, Bob owns an ape with a floor price of 100 ETH. He wants to lower his downside risk but he does not want to sell his precious ape. He found out about nftperp and opened a 100 ETH short position on the exchange.

If the floor price of BAYC drops to 90 ETH, his ape is now worth the value of 90 ETH. However, Bob also has a profit of 10 ETH from his short position that he took.

Instead of losing 10 ETH due to a decrease in the floor price, Bob hedged his position with no value lost.

Let’s say the opposite happened. If the floor price of BAYC increased to 110 ETH, Bob would have a loss of 10 ETH on his short position but his ape is now worth 10 ETH more than before. Like the aforementioned, Bob hedged his position with no value lost too.

On the other hand, let’s say Charlie is a Web 3.0 newbie and has been priced out from blue chip NFTs like BAYC due to the high barrier of entry. With nftperp, he can long BAYC with as little as USD $5 equivalent in ETH, and even has the option to leverage should he deem fit.

However, traders should know that there is a funding rate associated with trades, which should be factored into profit and loss calculations.

Let's see how nftperp could be valued when compared to derivative volumes on centralized and decentralized exchanges.

On the decentralized side, let's compare Uniswap and dYdX volumes as they are the largest "spot" and derivatives markets in the space.

Uniswap generates $1.09 billion in daily trading volume while dYdX averages $1.33 billion for derivatives. This evens out to 45.2% and 54.8% respectively.

In the world of NFTs, OpenSea is king. The platform generates about $16.36 million in daily "spot" volume, which we can use to project how nftperp well could do if the numbers were to match that of industry leaders.

Nftperp takes a 0.3% fee for all positions on the platform. We can see that if nftperp manages to capture a portion of OpenSea volume, it could be very profitable* for NFTP stakers, which incentivizes others to buy and stake NFTP and in turn drives the price of NFTP up.

I used GMX as a reference as the platform distributes 30% of revenue to GMX stakers.

*Assuming the protocol distributes a percentage of its revenue to stakers.

Overall, I think this offers a great opportunity for retail investors who would like to trade NFTs. Instead of purely flipping where one is required to buy low and sell higher than what their purchase price is to make a profit, nftperp allows one to profit no matter an increase or decrease in the NFT’s floor price as long as you’re on the right side of things.

In this way, those who are unable to afford a BAYC can now “own” it fractionally through a contract.

Furthermore, it seems that the protocol will be launching a token in the near future, which may be airdropped to those participating in the testnet. 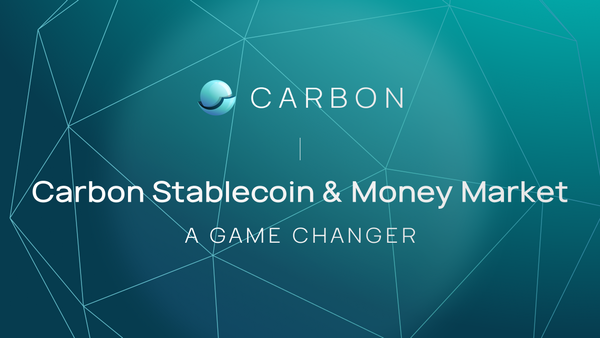 Today we announce a game changer - Carbon stablecoin and money market. Read on to find out how it works and what this means for Switcheo.

The NFT ecosystem has relied on centralized marketplaces like OpenSea and LooksRare for practically its entire existence. Today, a new wave of decentralized alternatives is set to challenge the current platforms on the market.