Strange Clan is a light-hearted minecraft-like RPG adventure game with quests, social activities, and competitive battles, with farming and crafting for NFT goods and tokens. The game will be developed in increments and released to the community as it progresses. It is built on Unreal Engine 4 which is the world's most open and advanced real-time 3D creation tool for photorealistic visuals and immersive experiences.

Strange Clan is built on the Cosmos ecosystem as the team wanted to build on a decentralised platform. Cosmos is able to connect with every chain connected via the IBC which allows the game to be hosted on Akash, a decentralised cloud computing service.

The Passage Marketplace will enable trading, viewing, and transferring of NFTs in the Cosmos Ecosystem with ATOM being the primary token of exchange. At the time of writing this will be the first NFT-Marketplace utilizing the native Cosmos ecosystem token.

The Passage marketplace is currently live on Juno.

NFT holders can now buy and sell Strange Clan NFT on the marketplace with the ATOM token being used for transactions. Users will still need to have Juno tokens in their wallet in order to pay for transaction fees since it is on the Juno chain. The current floor price of the Town 1 NFT is 85 ATOM but the Dutch auction started at 15 ATOM down to 9 ATOM. Holders are able to check the rarity of their NFT on https://strangeclanfans.com/.

The Marketplace will host both game and content NFTs with viewable 3D-assets that can also be used in worldbuilding. These can be both sold and bought as well as used with a usage fee.

Here are some test gameplay footage from their Twitter page directly. It looks similar to a combination of survival-crafting with magical action RPG in a 3D medieval-like environment. Not going to lie, we think it looks pretty dope.

The Passage token will have a fixed supply capped at 2 billion tokens. 30% of the genesis supply will be sold through public and private sale as a means to fund the continued development of the project.

The remaining 70% of the tokens will be released through staking rewards. The high APR is used to create long-term engagement through staking and to be aligned with other Cosmos tokens and LP opportunities which offer high yields.

There will be a high initial inflation of 50% in the first year with a 35% reduction each year until max supply has been reached after year 5. After year 5 the staking rewards will come through the Marketplace transaction fees.

The token will be released throughout year 1 to year 5 until the maximum number of 2 billion PASG tokens are fully minted.

First batch of the Strange Clan NFT will be launched with 5000 for the First Town. The NFT art is hand-drawn by the creative director, Nicholas Roberts (@opergator). Every single NFT will be unique.

Genesis NFTs will have unique benefits in the 2D Strange Clan experience which will be launched this year. They include:

Genesis holders will be the only one who can discover new recruits that new users will need to join the experience. This means that genesis holders control the economy of the game and they will benefit the most as the game grows.

The genesis NFT holders will also get exclusive opportunities in the 3D game:

⅔ of the airdrops will be received 3 days after the public sale for PASG tokens have been concluded. The remaining ⅓ can only be received if the holders stake their airdropped tokens for 14 months.

The Passage team is employed by 3Division which is helmed by the CEO and Founder Lex Avellino. The team, consisting of 14 full time employees, enlisted contractors and partnering companies, are focused on the development, growth, and enrichment of the Passage Ecosystem. The team has vast experience customizing and designing environments for major clients such as Amazon, Capitol Records, American Girl and more.

The art and development teams have worked on triple A games with their previous companies such as Epic, Ubisoft, Activision, Square Enix and many more.

For those who are unable to pick up a Town 1 NFT on the Passage marketplace, there will be another opportunity to pick up an NFT by getting in the Town 2 whitelist by participating in Passage and Strange Clan discord channel.

Strange Clan will be built on the Passage metaverse, a collection of worlds from different brands and creators connected by the Cosmos blockchain and powered by Akash Network decentralized cloud service.

The Passage team is developing tools to allow other projects to build their own worlds on the same architecture, creating a network of interconnected worlds of entertainment, remote work, gaming, and many more.

Being one of the first gaming projects on Cosmos gives them a first-mover advantage. The development team at Three Division have been constantly shipping and providing regular updates through their YouTube and Podcasts.

Strange Clan could potentially be considered part of GameFi 2.0 narrative with SandBox, GalaGames, AxieInfinity, and DecentraLand being part of the original innovators. However, there are many new competitors in this gaming / metaverse scene and only time will tell which one of them will succeed!

March was yet another exciting month at Switcheo Labs. As we embark on a new quarter of 2022, let’s look back on all that has transpired! 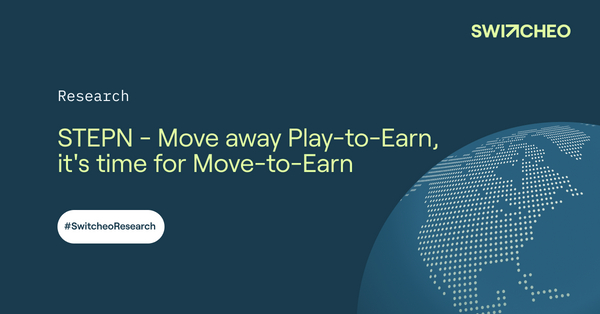 STEPN is a Web 3.0 SoFi (Social Finance) and GameFi lifestyle app created by Find Satoshi Lab on Solana, where players can walk, jog or run outdoors using their NFT Sneakers to earn reward tokens and NFTs.