The month of March was jam-packed for Switcheo and made even more special as we celebrated our third birthday on the 31st!

We pushed forward with many new development updates such as integrating Switcheo TradeHub with Binance Smart Chain (BSC), adding new liquidity pools to Demex and hitting a $100m market cap! Below, we dive into some of our proudest achievements in the month of March.

This March, Switcheo hit $100m in market capitalization - an accomplishment we could not have achieved without endless support of our community for whom the Switcheo team tirelessly works to bring better products. We are humbled that our vision for a decentralized future resonates with many and that the continual growth of Switcheo and our native token reflects the team’s dedication.

7.   Extension of liquidity rewards on Demex

Liquidity rewards on Demex were initially conceived to bootstrap liquidity in the early stages of Demex’s launch. In addition to the positive reception from the community, the imminent sunsetting of Switcheo Exchange was a motivating factor that prompted the reward extension.

As Switcheo Exchange was sunset, popular trading pairs were migrated over to Demex. Extending liquidity rewards on these migrated trading pairs served to incentivise liquidity and fill order books for seamless and smooth user transition from our legacy exchange to Demex.

In addition, extending rewards would also incentivize liquidity for newly-added Binance Smart Chain (BSC) LPs on Demex and efficiently onboard users from the BSC ecosystem over to Switcheo TradeHub.

The BSC-compatible Switcheo token (SWTH) has also been added to major protocols such as PancakeSwap, 1inch Exchange and DODO DEX. Not only did this drastically improve the accessibility of SWTH, but also put Switcheo on the map for a greater discoverability from existing BSC users.

Switcheo launched the Switcheo Development Fund back in November as a way to encourage community-led development projects that will contribute to decentralizing the protocol. In March, the following two proposals were successfully passed and awarded a total of 380,000 SWTH from the fund:

Proposed by long-standing Switcheo community members and developers, Devel484 and Switcheolytics, adding Python support would broaden developer tools available and ease the development process for those looking to build on Switcheo TradeHub. By lowering the barriers to integrating into Switcheo TradeHub, the proposal significantly adds to help decentralize the protocol.

Switcheo TradeHub validators Seraph Staking developed a staking app on Google Playstore that allows for SWTH stakers to track various metrics such as wallet balance, total amount staked and staking rewards. The proposal was submitted to update the underlying mobile technology to React Native which would support an iOS version of the app and addition of new features that would further benefit users.

In May 2018, a token swap for Switcheo’s genesis token - SWH, was announced. The swap period lasted over 1 year and saw more than 98% of tokens being swapped to the updated SWTH. Since then, several users who missed the swap have been coming forward. As such, this proposal was put forth by community managers Instol and Luke out of goodwill in a bid to resolve all unswapped SWH for users who missed the 1.5 year swap period with a final opportunity to swap out their old SWH tokens.

11.   AMA with Poly Network and others in BSC telegram channel

Being initial collaborators of Poly Network and a part of their growing ecosystem, Switcheo along with Poly Network and ecosystem partners - SuperNova and Seascape, participated in an AMA with Binance Smart Chain in the BSC telegram channel.

12.   Switcheo joins PancakeSwap with a Farm and Syrup Pool

Switcheo collaborated with PancakeSwap to launch a Farm and Syrup Pool to the delight of many users. The SWTH-BNB LP saw over $9m in liquidity locked up by users. The SWTH pool further enabled users to stake CAKE to earn SWTH, further introducing existing BSC and PancakeSwap users to the ecosystem.

The SWTH-BNB LP on PancakeSwap allowed for BSC yield aggregators Beefy, Autofarm and Swamp.finance to tap on the liquidity and generate greater yields for users.

March has been filled with countless events and developments and we are not slowing down any time soon. The team at Switcheo will continue to build and bring our community an even better trading experience with Demex and Switcheo TradeHub. Users can expect much more in the coming months!

Switcheo is a protocol and software development entity focused on building groundbreaking platforms and blockchain solutions that pave the way for a decentralized future. Its flagship protocol, Switcheo TradeHub, is a layer 2 cross-chain protocol designed for high-performance trading of any asset, at scale. Traders can deposit tokens from various L1 chains to trade on Demex, a 2nd-generation DEX that runs on the Switcheo TradeHub protocol. 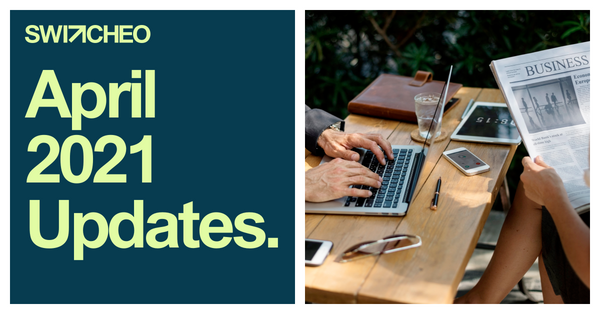 Out with the old, in with the new. In April, we said goodbye to the old Switcheo Exchange and migrated fully over to the new and improved Demex! 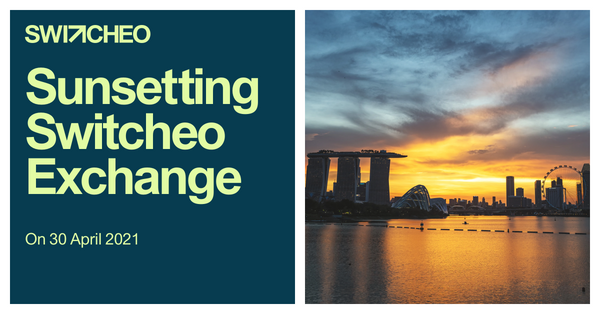 Switcheo Exchange will officially be decommissioned on 30 April 2021. After this date, the exchange will cease trading and deposit activities. Why we are retiring Switcheo