The news that dYdX V4.0 will be deployed on Cosmos may have taken the community by storm, but only confirmed what the team at Switcheo Labs already knew — that Cosmos SDK is the way to go for building a fully decentralized orderbook DEX, and more importantly, a strong validation that Carbon and Demex is ahead of the pack.

It’s been an incredibly fulfilling period for Carbon.

Since our last update, we’ve crossed the 15,000 mark for total Carbon users! This marks a strong, sustained growth despite the bearish downturn, a heartening sign that Carbon is not alone in its vision — to be the core of decentralized finance — but instead, marching forward with a bunch of loyal supporters behind the scenes.

For more on-chain data, head over to scan.carbon.network.

Despite the market sentiment, or perhaps because of it, it has never been more urgent for projects to focus on their original vision, hunker down, build. And that’s exactly what the team at Carbon did for its latest V2.6.0 software upgrade — build.

Cross-chain interoperability is crucial to unlock the potential of digital native assets. Supercharging seamless cross-chain transfers, Carbon’s bridge module enables just anyone to bridge assets across all supported chains on Carbon in just one transaction, without requiring a Carbon account.

The team is currently hard at work in preparation for the launch of Carbon’s very first native bridge (powered by the bridge module), and expects to launch it on CarbonHub shortly - share with your community and stay updated on our socials!

Carbon is committed to streamlining your DeFi experience. Where users had to submit a proposal through governance to list new tokens previously, the permissionless token import feature enables anyone to add their desired tokens on supported chains effortlessly on Demex in just 2 simple steps: select (1) desired blockchain and (2) token address. This gives users full control over what token is being listed, granting them unrestricted access.

To promote greater validator participation and enhance chain health, a ‘Slashing inactive oracles’ feature was rolled out in Carbon’s V2.6.0 upgrade. As of now, validators that have less than 25% voting uptime within each one hour window (spanning ~1600 blocks) will have their delegated tokens slashed at an amount of [0.0000491% * min(no. of consecutive slashes + 1, 24)]. The maximum slashing per day is approximately equal to the current inflation rate.

The slashing count will be automatically refreshed once validators pass the threshold.

In line with this, to improve transparency, validators and delegators alike can now track and monitor their slash count on Carbonscan.

To facilitate trading and reduce market volatility, having liquid orderbooks on Demex is of utmost importance. In line with this, Carbon has an in-built reward module in its code, enabling liquidity providers to benefit from providing liquidity to liquidity pools (LPs), earning a percentage of block rewards in addition to taker fees from trades made for that market. This is especially crucial for Carbon’s AMM-backed orderbooks which simulate AMM liquidity as real orders on Demex orderbooks.

The previous cycle of LP rewards came to an end 10 June, 2022; For the new cycle (until 2nd September, 2022), we increased LP rewards to a static 40% of block rewards. With this reward structure, liquidity providers will be able to enjoy consistent, higher APRs and are better incentivized to deposit their tokens in Demex pools with higher rewards awarded, driving higher liquidity.

By reviewing the reward curve every 12 weeks, we hope to make timely adjustments according to market sentiments and total amount of liquidity provided. This will enable users to maximize rewards earned, as the team strives to allocate liquidity rewards efficiently.

In line with the above, the pool weights of the following pools — XSGD/BUSD, USDC/ETH, USDC/WBTC and OSMO/BUSD — were adjusted. These pools observed lower liquidity utilization rates and by lowering their weights, we seek to allocate rewards more effectively to existing and upcoming new pools that might attract more organic volume.

To ensure that they are in line with existing markets and documentation, the default parameters for markets were updated —

Yes, you read right — this month, we bring to you a new market interface on Demex. Built on Carbon, Demex is a fully decentralized platform that supports any cryptocurrency derivative product. Demex is highly-optimized for trading-related execution paths and provides the speed, scalability and safety you need, so you can trade the way you want.

Demex prides itself in supporting users with a seamless trading experience, and with the latest Markets UI refresh, users can now easily analyze the spot and futures market, all on one interface.

If you have not had the chance to experience the new Markets UI, now is the time!

P.S. In case you missed it, we released a Trade UI refresh last month; Check out the squeaky clean trading interface here.

3. Demex Futures Trading Competition — Maker vs Taker: Out with the old, and in with the new

We’re happy to share that the Maker vs Taker futures trading competition 1.0 has ended with a bang. The heartiest of congratulations to all winners, and to all participants, thank you for your participation!

We will provide an update shortly on the status of the prize winnings.

At the same time, as the title of this section suggests, we're excited to announce that the next futures competition is going live TODAY, 1 July, 2022 at 8:00am UTC. Similar to the previous competition, traders can trade on the BTCUSD or ETHUSD futures markets with $USDC as collateral, at up to 50x leverage, for a chance to win from a $20,000 prize pool. Be sure to set your alarms!

4. Zolar — Time to build your Guilds!

Over at Zolar, Zolarians everywhere are still gearing up steadily for a sweet taste of that cosmic gold.

Since we last spoke, all Gen 1 Metazoa has been summoned and with that, we welcomed the birth of Gen 2 Metazoa!

4.1. Everything you’re dying to know about Metazoa Guilds

As the adage goes, ‘United we stand, divided we fall’. The time has come for Metazoa to assemble their troops and forge new alliances, as the battle for HUNY trudges on.

Each guild starts with an initial maximum member size of 30, with guild size upgrades available in the future. From Guild Crest and Guild Rooms to Guild Officers and Champions, players are in for an adventure!

Not forgetting Guild Banners and Sigils too, with the latter representing the Guild’s current playstyle. Far from aesthetics, they affect upcoming drops and future gameplay mechanics, so be sure to choose wisely.

P.S. Can you spot the different playstyles and their characteristics in the poem below?

"Far over the metaverse wide and mystical,

To galaxies bright and ethereal,

We must rally and march to our common goal,

To seek the dazzling liquid gold.

For all Metazoa — Ursas and Minos,

With your piercing spears and gleaming shields, behold!

The time has come to build a guild,

A task fitting for the masterful and skilled.

The sigil on the banner hanging from your guild’s tower.

Calling for all Merchants far and wide,

Whose vision and enterprise overcome every tide.

Ursas, beware. With the Mercenary, you’re in for a ride.

Cunning and ruthless, kidnapping and pillaging shape their very pride.

Steadfast and loyal, Guardians, will you defend our metaverse,

Safeguard our Metazoas and restore the cosmic balance?

Together, Zolar shall see its first light.

The journey ahead is littered with treacherous danger.

In Zolar’s cosmic sphere of myth and mayhem, Rangers,

Your fate has been written in the stones.

Now, let’s begin the battle for the throne!"

Friendly Note: All Guilds have to be inaugurated with a bespoked Guild Crest. The price of a Guild Crest scales with the circulating supply of $HUNY, so be sure to form your guild earlier, rather than later!

The prestige bestowed on each Guild depends on “Strength rating” and “HUNY power”, which confer esteemed benefits respectively. Strength Rating is a measure of the Guild's combined strength and will be used for various airdrops and Missions in the future.

Who you’re battling side by side with determines how far you’ll go in the Zolar multiverse; Choose your Guild members with careful deliberation!

For more information, teleport here. To join or create a Guild, click here.

Calling all agents — Your hardwork and bravery has paid off and Operation Sticky Paws was a success! Two combatants have emerged victorious from the battlefields and proved themselves to be epitome of willpower and perseverance.

As promised, the Metazoa rewards have been deployed. Until the next mission, lads!

Bear markets might come off as a taboo word to some in the Web 3.0 space, but on the flip side, for others, this period is also championed as the opportune timing to double down on building their strength for the next bull run, but the daunting question lingers, unspoken: Will they make it? Switcheo Research digs in so you don’t have to. 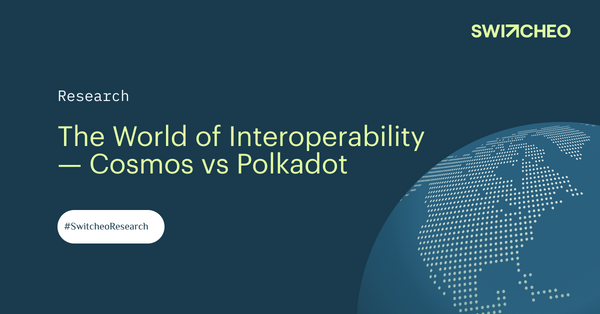 Cosmos and Polkadot are prominent names in the realm of blockchain interoperability — As they continue to make strides in the bear market, we take a look at the two leading ecosystems and share our findings. 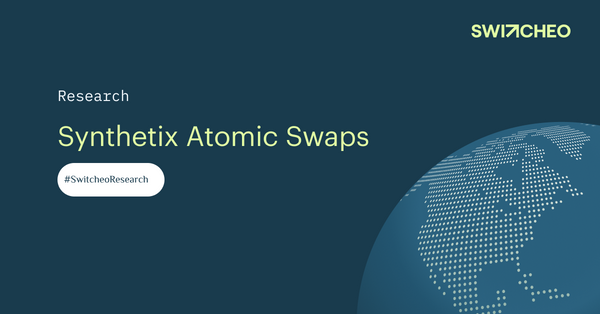 As one of the most unique protocols built on Ethereum and Optimism, Synthetix offers an interesting way for users to gain exposure to real world assets without owning them with Synths. Intrigued? Here's all you need to know about Synthetix and its budding potential.