Carbon is now live on mainnet following the successful chain migration from Switcheo TradeHub to the new Carbon chain! Carbon’s genesis block was produced on 11 January 2022, marking the dawn of the IBC era for Carbon and bringing us one step closer to becoming the core of decentralized financial ecosystems.

Carbon was first introduced to the world with its testnet release in December where users were invited to experience the protocol’s enhanced technological prowess on Demex and Carbonscan as a re-launched protocol (from Switcheo TradeHub). Now, the time has come to experience Carbon in its full glory.

Released alongside Carbon’s mainnet launch is the Cosmos Stargate upgrade which comprises a Cosmos-SDK migration from from v0.39 to v0.44. The upgrade packs a punch, but primarily encompasses key performance improvements, wider chain support and greater developer ease-of-use to the Carbon protocol.

Stargate sets the stage for Carbon to be able to support the Inter-blockchain Communication (IBC) protocol, a highly-anticipated update that enables connectivity between Carbon and other IBC-enabled protocols. Already, IBC is supporting over 18 networks such as Cosmos Hub, Terra and Osmosis, introducing boundless possible cross-chain synergies between the Cosmos ecosystem and existing chains supported Carbon including: Ethereum, Zilliqa, Neo and Binance Smart Chain. Very soon, liquidity will be able to flow freely across these siloed ecosystems through Carbon as an interconnected DeFi hub.

With new doors opened to the Cosmos ecosystem, Carbon’s governance token, SWTH, will also play a greater role in bridging participating networks to the Carbon protocol as an ICS-20 token standard. SWTH will soon be attainable directly on major Cosmos DEXs like Osmosis, Sifchain and Emeris, boosting not only token discoverability on the interchain, but wider adoption of the Carbon protocol!

The first IBC connections we’re looking at are to Cosmos Hub, Osmosis, Terra and Secret Network. If you are a core developer or community leader from these projects that can help, do ping the Carbon team on our #carbon discord channel!

In Carbon’s pursuit to be the core of the multi-chain world, the ability to deeply integrate with Ethereum, the most widely used blockchain network, is essential.

Carbon will utilize Evmos — the EVM hub of Cosmos — which allows Carbon to have EVM compatibility. This presents complete alignment with the EVM specification, bridging the gap between Ethereum’s Layer-1 and Layer-2 execution environment. Anyone can then deploy Ethereum smart contracts (ie. port Ethereum dApps) onto Carbon without the bottlenecks of congested networks and exorbitant gas fees. As a result, development on Carbon can be scaled significantly, similar to how EVM-compatible chains Binance Smart Chain and Cronos have become a hotbed for new applications.

As anyone can interact with modules on Carbon via EVM, barriers to entry for developers are lowered which significantly expedite protocol development and growth. This is complemented by the Protobuf Migration (more below) which introduces a wider range of supported programming languages to Carbon.

Additionally, EVM-compatibility bolsters protocol security while bringing users greater convenience through the ability to sign transactions directly from EVM wallets such as Metamask, without having to use separate addresses, mnemonics and keys.

In Carbon’s vision to empower open financial markets, it provides the necessary tools for anyone to launch their own decentralized paradigms. To support these financial constructs and new innovations, robust architecture must be set in place for systems to run seamlessly and securely.

Stargate introduces Protobuf Migration to the protocol which enhances the encoding format of the blockchain, benefiting the protocol in the form of faster transactions, lower gas costs, and more transactions per block (up to 100x!). Carbon has been battle-tested to handle a peak load of 10,000 transactions per second without compromising security. This is approximately 600x higher than what Ethereum can currently support!

Developing applications on Carbon will also be highly more efficient with the introduction of light clients that act as alternatives to full nodes and require much less development resources.  This will not only speed up development on Carbon, but also pave the way for rapid expansion of products and features to run on the protocol!

For more on the technical improvements that Stargate will bring to Carbon, check out the blog post: Entering a New Era of Interoperability.

SWTH remains the native cryptocurrency and governance token of Carbon, with over 1.1 billion SWTH currently staked and securing the protocol through the delegated Proof-of-stake (dPOS) consensus mechanism.

With staking at its core, Carbon’s mainnet launch will continue to optimize staked SWTH by laying the groundwork for transferable bonded tokens (A.K.A bSWTH)! Essentially, stakers will be able to mint bSWTH when staking SWTH, and utilize the token in new ways, such as gaining access to greater liquidity through lending or collateralization, whilst still earning rewards on their staked assets.

As Carbon continues its expansion into new blockchains and protocols, more utility and value can be expected for the SWTH token which will act as a gateway between external protocols and Carbon.

Driven by the Community

Carbon is envisioned to be a fully decentralized protocol driven by community spearheaded initiatives and development, and everyone is invited to join in on this groundbreaking journey.

SWTH token holders can stake their tokens to earn from block rewards and all transaction fees from the protocol, and also participate in governance by proposing changes that drive growth of the protocol.

For more on what you can do with SWTH, check out this article!

Users of dApps powered by Carbon including Demex and ZilBridge can expect major performance improvements including faster transactions, lower gas costs, and more transactions per block.

Building on Carbon just got easier for developers with the Stargate upgrade which introduces Protobuf Migration — improving the core encoding format of Cosmos SDK — and full-featured light clients.

Find out how to build on Carbon with Carbon’s developer guide and API documentation.

Carbon’s mainnet launch paves the way for groundbreaking features and capabilities that will thrust Carbon to the forefront of the new DeFi era. These upgrades will focus on further enhancing the protocol’s core architecture, improving support for more types of financial constructs, connecting with more blockchain ecosystems and decentralizing even more aspects of the protocol.

With the combined efforts of Switcheo Labs core developers, validators, community developers and the wider community, Carbon will continue to push the boundaries of DeFi and set a precedent for the industry as a whole. The journey has just begun! 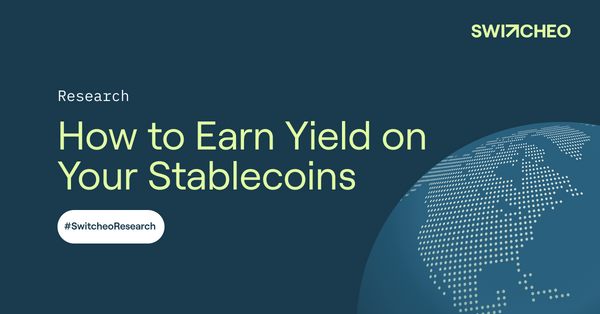 Stablecoins are a crucial component of the crypto ecosystem. Here are some ways you can earn high yields on your stablecoin holdings 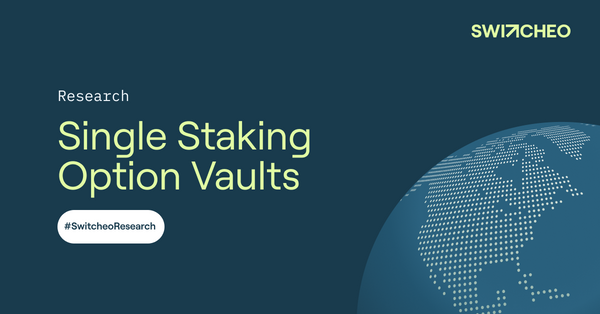 Single Staking Options Vaults (SSOVs) allow users to lock up tokens for a predetermined duration and earn yield on their staked assets.