At Switcheo, we focus on empowering the future of finance by supporting the creation of sustainable and value-added products that help users from all over the world improve their finances.

One of the biggest use cases in finance is lending and borrowing - worth trillions of dollars. This is why Carbon is starting a money market where people can lend or borrow against their idle assets to make them more useful.

With the launch of Nitron - Carbon's money market, it allows for permissionless lending and borrowing of assets from Cosmos to Ethereum and beyond. With this launch, Carbon is getting closer to being an all-in-one hub for DeFi that lets users enjoy everything it has to offer.

This article will explore what the Carbon stablecoin is and how it will add value and utility to SWTH token holders and stakers.

What is Carbon stablecoin?

In the spirit of decentralization, the Carbon stablecoin will be a native Cosmos stablecoin that is overcollateralized and permissionless. It will be soft-pegged to the USD and run by SWTH holders alone.

What backs the value of the Carbon stablecoin?

To maintain the USD peg for our Carbon stablecoin, it will start off by being backed by blue-chip collaterals with deep liquidity, before phasing in other assets such as liquid staked derivatives and other niche tokens through governance votes.

As we are EVM-enabled, blue chip assets such as WBTC, ETH, USDC will be whitelisted on day one.

And because we are also a Cosmos appchain, we will whitelist the deepest liquidity assets on Cosmos such as ATOM and OSMO.

But we are not stopping there, with the rise of liquid staked derivative tokens, liquid staked versions of PoS tokens such as liquid staked ETH, ATOM, etc will also be included, allowing users to borrow against value-accruing assets, and will be the basis of a self-repaying loans feature in the future.

Why are you accepting USDC as collateral?

The reason why USDC is enabled as collateral despite Carbon stablecoin aiming to be a decentralized stablecoin is because many users hold USDC and would want to have the most flexibility on how they use the Carbon money market, including depositing USDC as collateral and borrowing other assets as well.

Because Carbon is truly permissionless, the Carbon community can always hold a governance vote proposal to remove USDC or other assets as collateral if there is enough support.

What is the Carbon stablecoin for?

The carbon stablecoin will have a growing list of features, but the initial phases will focus on the following utilities:

How do you mint the Carbon stablecoin?

Each collateral will have their own maximum LTV and liquidation threshhold for minting the Carbon stablecoin.

If the value of the user's collateral drops too much, it would be up for liquidation on our liquidation engine which also has a public frontend interface. This allows anyone to participate in liquidations, democratizing liquidations and making them available to a broader user base rather than just bots.

What are the parameters for the Carbon stablecoin?

The initial parameters for the Carbon stablecoin, such as minting fee, interest rate, and liquidation fee, will be very affordable for users to mint.

Later, when the money market and stablecoin are more established, these parameters can be changed through a governance vote.

How does Carbon stablecoin increase the utility of SWTH?

All decisions relating to the Carbon stablecoin will be in the hands of the SWTH community. This means that staked SWTH holders will have voting rights that determine how much Carbon stablecoin can be borrowed in all of the various money market pools, including isolated and efficiency pools, etc.

Other protocols who want to increase the utility of their collateral by allowing it to be borrowed against, can buy up SWTH to have more voting power to whitelist their collateral or increase the Carbon stablecoin cap that can be supplied for their isolated pool. We will share some examples of bribing below.

There can be a tiered discount system where the more staked SWTH a user has, the more discount the user receives on minting Carbon stablecoin. This can be up to a certain quantity, i.e. if a user has $1000 worth of SWTH, it allows the user to mint $1000 Carbon stablecoin at a discounted interest rate (numbers are just a crude example).

These figures can be adjusted via governance as well. Other protocols can also buy up SWTH to make a governance proposal and vote for their collateral to get a lower interest rate on minting Carbon stablecoin.

Part of all revenue generated by the stablecoin will be sent to the SWTH stakers, generating revenue for the community and bolstering the SWTH treasury for funding future products.

An overcollateralized stablecoin will also bring a lot more transactions to the network because of arbitrage, liquidations, and other activities. This will increase the rewards and APR for SWTH stakers.

All of these will have different parameters that will be determined by SWTH governance as well, which may incentivize other protocols or users to buy SWTH to change the parameters to their benefit.

Although the crypto is in a bear market right now and the collapse of FTX is sending ripples through the crypto ecosystem, we are firm believers that this creates a tailwind for DeFi hubs such as Carbon that aim to offer better features than centralized exchanges without compromising on user's security.

Stablecoins are one of the key pillars in any ecosystem and have one of the strongest proven use cases. This is why we believe that the introduction of the Carbon stablecoin will be another huge milestone for the Carbon ecosystem and will add more utility to SWTH stakers, as we build towards being the best DeFi ecosystem across the cryptoverse. 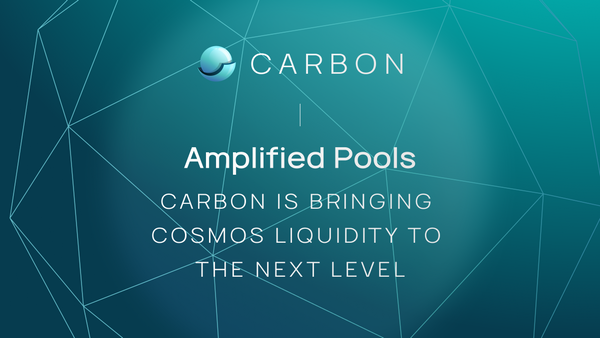 With the introduction of amplified liquidity pools, users on Carbon are able to trade with much lower slippage and provide liquidity with more capital efficiency. Find out more in this article!